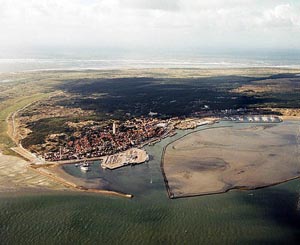 The Wadden Sea is our classroom in front of Harlingen. Thanks to our many years of experience, we know the Wad and the seaholes like the back of our hand. The trenches form the gateway to the high seas, in these areas the wind and tidal currents influence the waves.

The Wadden Sea area runs from Esbjerg in Denmark to Den Helder. Before the Afsluitdijk was constructed, the Zuiderzee also belonged to the Wadden Sea. With the exception of the Danish part since 2009, the Wadden Sea area is on the UNESCO World Heritage List because there are only a few comparable areas worldwide. Typical are the sandbanks that dry out during low tide and are separated by more or less deep channels.

The Wadden Sea is an important habitat for many birds, a wintering place for migratory birds and there are two types of seals. The shallow, relatively warm water accommodates large numbers of plants and animals.

The island of Schiermonnikoog and the dunes of Texel are national parks. The German part of the Wadden Sea is also a nature reserve.

In the western Wadden Sea there are mussel farms where mussel seed is released. Dry-tidal flats can no longer be fished for years because this disrupts an important food source for typical wading birds such as the eider duck and oystercatchers.

Due to the constantly moving channels and banks, navigating the Wadden Sea requires special knowledge and experience. There are still often ships with flat bottoms and side swords and the traditional sailing freighters such as clippers, tjalks and barges.

Texel is the largest Dutch Wadden island. The island Noorderhaaks also belongs to Texel. The entire dune area of Texel forms the Dunes of Texel National Park. Due to the open location directly on the North Sea, the island is constantly exposed to influences that have an effect on the dunes. Large parts of the dunes can be swept away during a severe storm. The island is protected by means of sea walls and dikes. The reason for Texel was an important stopover in the VOC period, especially for the northern VOC places, before they actually left for the East. The departing ships lowered their anchors and waited for the wind to come from the right direction.

After Schiermonnikoog, Vlieland is the least populated municipality in the Netherlands and is located in the province of Friesland. In the past there was a second village next to Oost-Vlieland, called West-Vlieland, until it disappeared into the sea in 1736 due to flooding. The lighthouse of Vlieland itself is only 9.5 meters high but due to its location on top of the Vuurboetsduin, the tower shines 51 meters above sea level. The Vliehors is a widened beach of approximately 24 kilometers on the western half of Vlieland, which is largely used as a training ground. The marina of Vlieland is open all year round but in the summer months it is a busy place. The strong current for the marina is perpendicular to the entrance and requires concentration during the approach.

The cranberry is found in the wet dune valleys of Terschelling, this plant landed on the island after an American barrel with berries washed ashore in 1845.

The ports of Terschelling are on the west side of the island. Except in the marina, a reasonable current runs through the port throughout the tide. Terschelling has more sun and rain blows earlier than in the rest of the Netherlands. The combination of the open horizon, the boundless air that extends above Terschelling and the natural transition between mud flats and the sea makes a visit to the island a special experience.