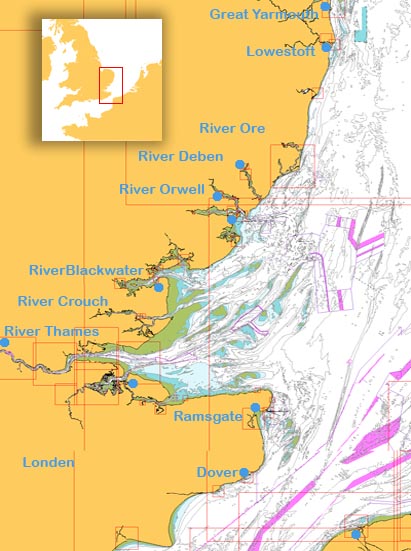 The EastCoast Rivers are a fantastic area for 60 mile passages and fascinating visitors. Every trip is different and we always try to discover a new harbor. Great seaports are Great Yarmouth, Lowestoft, Harwich, Ramsgate and Dover.
View the full overview of trips abroad and the expected knowledge and experience. Foreign trips for Advanced or Yacht skippers

Lowestoft has a seaport that, unlike other ports in the area, can be called at any tide. Lowestoft is the most easterly point in England and therefore loved as a port of departure or arrival for the North Sea crossing. The club building of the Norfolk & Suffolk Yacht Club is a historic building with the monument status.
The smaller rivers with exciting calls such as the River Deben or River Ore but also Southwold are impressive sailing areas. They require thorough preparation and good timing. They all have their own characteristics in the form of constantly changing thresholds and shifting gravel banks. The current can run fast in the rivers to sometimes 6 knots at spring tide. When we sail the rivers, we always have to wait and see how we will find the situation at that moment.

Ramsgate is the nearest port of call for the crossing from the Netherlands and Belgium to the English east coast. The old warehouses that surround the harbor give the city an authentic look. It is a good practice to visit the Royal Temple Yacht Club and then sign the guest book, drink a beer or whiskey and exchange some experiences.
Dover is characterized by the ruins of Dover Castle that rises above the characteristic White Cliffs. It is a beautiful old big castle from where you can look out over the Channel and also see France in the distance. For the port it is a constant arrival and departure of ferries. In Sparrows Nest Park, there is a maritime museum which is worth a visit on a windy day.

Harwich has a lively approach due to the many ship movements. The approach can be done both during the day and at night by following the "Recommended Route" for Yachts. Once past Harwich on the River Orwell, the area exudes a serene atmosphere where the rolling landscape looks like parkland. Further up the river is Ipswich with a coaster port that brings the necessary bustle of large and small ships. Halfway up the river Orwell lies on the port of Woolverstone. From this marina it is a nice walk along the banks of the Orwell, to Pinn Mill with the famous pub Butt & Oyster.

Consider also the Thames estuary and the streams along the banks that can whip up the sea. If you are late for a passage, the journey can take considerably longer due to a counter current. The Thames Estuary with the banks and cross flows is our practice area with decision moments. Sheerness is located on the south bank of the mouth.

The River Thames is long and can best be done in one tide. There can be a strong current in the wide river and when the wind direction is opposite to that of the current, it can produce an exuberant sea course. The Tower Bridge as the ultima

te goal is an impressive experience and once behind the lock gates of St Katherins Dock we are ideally situated for the city.

Sheerness lies south in the mouth of the Thames. Known from the Journey to Chatham. The Battle of the Medway was a successful Dutch attack on the English war fleet and shipyards in June 1667. 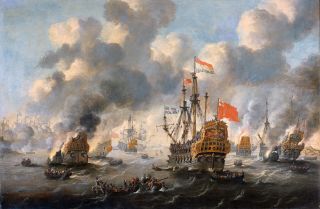 The Dutch, under the command of Admiral Michiel de Ruyter under the direct supervision of a traveling companion Cornelis de Witt, bombed Sheerness, sailed the Gravesend, then sailed the Medway to Chatham, the most important English naval base since 1560. They sunk three large and ten small ships, entered the HMS Unity and HMS Royal Charles, the pride and flagship of the English fleet and dragged it to the Netherlands. It was the biggest loss ever for the English Navy and led to a quick end to the war.