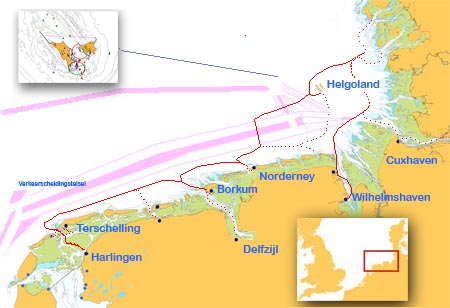 The route above the German Wadden Islands is known as the difficult but also fascinating waterway to the Baltic Sea. Islands that we can visit include Borkum, Norderney, Wangerooge and of course Helgoland or perhaps also Sylt.

View the full overview of trips abroad and the expected knowledge and experience. Foreign trips for Advanced or Yacht skippers

Borkum lies in the catchment area of the Eems estuary and originated from two islands, called Westland and Ostland, which were only separated in 1863 by a creek, a small water channel. In the Hanze period it was a pirate nest and in the 17th century many Bork numbers sailed on Dutch Whalers. After the 18th century, whaling declined sharply and only 400 people lived there. The island was occupied by the French in the meantime. Borkum owes its current character to the holiday makers who went to the island since 1834.

Due to the strong tidal current and the often strong wind, the run-up to Borkum can be turbulent. We navigate ahead and strive to keep as many options as possible open to choose where we want to end up or not.

Norderney is a municipality in the German state of Lower Saxony and officially has the status of city. The island is approximately 14 kilometers long and 2 kilometers wide, has an area of around 25 km² and has around 6,000 inhabitants. The capital of the same name is located on the west side of the island and is an important resort. Norderney is approached from the sea through a narrow channel. 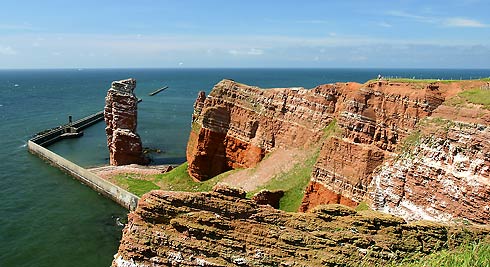 Helgoland is an island in the North Sea that was part of Denmark, Great Britain and now Germany. It is the only island on the high seas that belongs to Germany. The island is especially important because of the (eco) tourism. Already in the 19th century, Helgoland was known as the most healthy area in Germany. Helgoland is a municipality of its own and is not part of the customs territory.

On Helgoland you can walk a coastal route, read about the history, visit the city, shop in the many shops or view the bay from a terrace. Helgoland is located amidst the traffic separation systems and on the route there you will come across large shipping. Points for attention are the rules, we remain a long distance from traffic separation systems, but we will also have to cross. How do we do that?

Nautical details for a trip to the Baltic Sea
A course or training in this sailing area is a good start if you would like to move your sailing area to the Baltic Sea. The German Bight is characterized by the sea holes to the North German Wadden Islands. In addition, preparation with determining the flow windows, determining the right time of departure and taking margins are part of the journey. The weather in combination with the trench determines whether a port or trench can be called. The sailing program is determined by the persons on board based on the above factors.