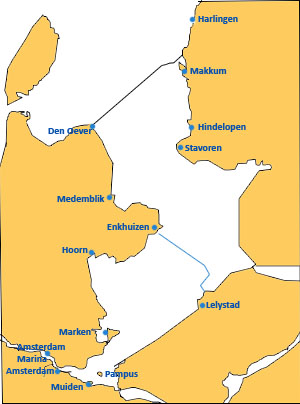 View the overview of basic courses with a cabin boat on the IJsselmeer and Wad.

Enkhuizen and Medemblik: The image is determined by a huge fleet of recreational, cruisers and historic vessels. The towns have a large amount of monuments, historic buildings, facades and museums, of which the Zuiderzee museum is the best known. red blue green yellow

Den Oever: lies on the Afsluitdijk on the former island of Wieringen. The marina is located directly on the IJsselmeer, Wadden Sea and the North Sea, for us Den Oever is an ideal base for fresh or salt water.

Hoorn, Marken and Muiden are located on the Markermeer. Coming from the north we first pass the Paard van Marken, the remarkable lighthouse that is visible from a great distance. They are old towns, loved by all kinds of water sports enthusiasts.

Pampus is a fortress island of more than 100 years old. It was originally intended to protect the mouth of the IJ. The fort was built on the existing shallow Pampus for which the East Indiamen had to wait before they could enter the port of Amsterdam. They were then "before Pampus". As Sea sailors, we are happy to anchor behind the island.